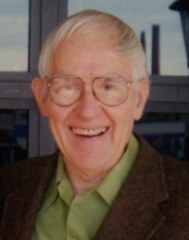 Founding PEC member, author and eco-justice advocate, William Gibson was a true earth care pioneer.  He served in the U.S. Navy in WWII and earned a Bachelor’s of Divinity from Princeton Theological Seminary and a Doctorate in Christian Ethics from Union Theological Seminary New York. He was an ordained Presbyterian Minister. He was in campus ministry at the University of Arkansas at Fayetteville, the University of Pennsylvania, the University of Rochester, RIT, and Cornell University. In 1974 he led in the founding of the Eco-Justice Project which was a part of the Center for Religion Ethics and Social Policy at Cornell. He was editor of the Egg: A Journal of Eco-Justice, for nine plus years. He wrote numerous articles and book chapters and was editor of the book Eco-Justice-The Unfinished Journey. He loved God and humankind his whole life by working for peace, justice, and the environment. He was a part of the Civil Rights Movement in the 1950s and 1960s, spoke out against every war since WWII, was a leading member of the Presbyterian Eco-Justice Task Force, Presbyterians for Restoring Creation, and the Eco-Justice Working Group of the National Council of Churches, and served on the Loaves and Fishes Board and the Fair Wage Coalition in Ithaca, to name a few of his activities over the years.